Two events this summer are marking the passing of time in my life: my birthday and my 50th wedding anniversary. Yes, I’m definitely getting older, and I’m wondering how much wisdom I’m allowing God to build into my life.

Over the past several months, God has been making me more aware of the spiritual battles that Christians face. Ephesians 6:11-12 says, “Put on the full armor of God so that you can take your stand against the devil’s schemes. For our struggle is not against flesh and blood, but against the rulers, against the authorities, against the powers of this dark world and against the spiritual forces of evil in the heavenly realms.” (NIV)  Tuning in to any newscast or perusing any daily newspaper will confirm that the devil is alive and well on Earth, and that his servants are very busy.

I was praying early one morning outside a classroom door. When I opened it, I stopped, sensing darkness and feeling a heaviness in the room. I had never experienced anything like this before, but I knew that whatever was occupying the room was not of God, because Jesus is the Light of the world and He dispels darkness. So I began asking God for His protection. I prayed that He would cast out whatever was in that room. And then the Holy Spirit directed me to open a window. Really, God? You want me to walk all the way through this room? But again I felt the urge to open a window. Praying for safety, I crossed the room. When I opened the window, I felt a rush whooshing past me. The room suddenly emptied of darkness, and the feeling of heaviness was gone. God’s presence filled that room.

A few months later, I came down with weeks of an illness that I thought would never leave. A reaction to the doctor-prescribed medications made my body worse. Not only was I physically a mess, but I could not put two thoughts together to form a cogent sentence. My brain was mush! When I was finally able to be upright for a while, I downloaded a word-puzzle game on my computer to try to rebuild my mental processing. Working the puzzles for a few minutes now and then seemed to help my brain recover.

Enjoying the mental healing, I played a little longer. Then longer still. I began telling myself, “I’ll do only three puzzles, and then I’ll get down to work.” But the “father of lies” (as Jesus calls Satan in John 8:44) began whispering: “It’s OK to keep playing. It’s really helping. Don’t think about the time you’re spending.” Before I realized it, we were less than halfway through the month and I had already completed all of the puzzles for that month. And I had also finished the word puzzles for the two months prior to my illness. 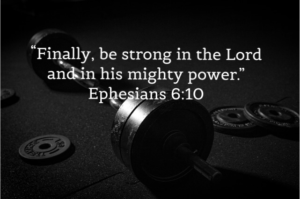 Wow! I had been sucked in! I had made a good thing into an idol and a timewaster. I needed to confess and claim Jesus’ forgiveness. I also needed to put on some spiritual armor (Ephesians 6:14-18) so I can stand against Satan’s future schemes. He will surely try to draw me into some other timewaster. But hopefully the next time I will be a little wiser, and I will recognize the source of temptation before I begin drowning in it. I pray I’ll remember to “Be strong in the Lord and in His mighty power” (Ephesians 6:10, NIV).

I’m probably not alone in getting drawn into things that take me away from spending time with God or completing the tasks that He would prefer I do. Do you also face temptations that pull you away? How is God helping you to recognize Satan’s influence in those situations? Feel free to leave a comment, and let’s pray for each other, that we will stand firm in our spiritual battles, claiming God’s mighty power. In Jesus’ death on the cross and His resurrection, He has already defeated Satan. And God has given us spiritual armor to be able to claim victory. Let’s be wise enough to put on the armor!

Carol C. and her husband have been married for 50 years.  She is a proud mother and grandmother, as well as a teacher and author.  To explore this topic further, you may enjoy our series Captive-Taking Control of our Thought Life.  You can listen to any of our Bible studies by tuning in to your favorite radio station, listening to our podcast on iTunes, or listening through TuneIn or Stitcher online radio.