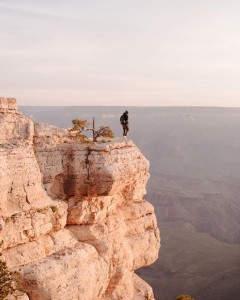 “For I am convinced that neither death nor life, neither angels nor demons, neither the present nor the future, nor any powers, neither height nor depth, nor anything else in all creation, will be able to separate us from the love of God that is in Christ Jesus our Lord.” Romans 8:38-39 (NIV)

Have you heard This Is Now by Casting Crowns? I love how the lyrics tell the story of Peter:

Peter is one of my favorite Bible people. I think I like Peter mostly because he is the classic example of I-really-screwed-up-but-somehow-Jesus-still-loves-me. I relate to this a lot.

I really appreciate this quote from Mark Hall, the lead singer of the band, “Your logic will tell you that you’re on strike two, but you’re not. You’re His and if you belong to God, you are always His.” How sweet is this knowledge? To know that nothing can separate us from His love is the most profound truth we can ever hear.

Remember when Forest Gump sees Jenny at the anti-war rally, and they rush through the water to reunite?  I think it was a little like that (only less romantic and no cheering crowd) when Peter saw Jesus on the shore, waiting for him (John 21). The mental picture I have of Peter realizing that his Savior is alive is beyond joyful, while the memory of his denial of Christ is beyond shameful. As a woman who cries at all the things, I am certain that Peter wept as Jesus hugged him. Scripture doesn’t tell us what was said at their initial reunion, but in the context of the Word we can certainly surmise that repentance and forgiveness were key elements. Jesus later has a conversation with Peter where He restores his position as a disciple, asking Peter to feed His sheep (John 21:15-17). Peter’s sins and failures didn’t make him unusable in the Kingdom.

The life of a Christian is to be marked by change, as the Holy Spirit works in us after our conversion, but that change often doesn’t look the way we expect it to. Nowhere does the Bible tell us that we will become Super Sister Christian who always does the right thing and never yells at other drivers. But as we fully submit to His will, He is faithful to change us, to teach us, and to never let us go from His hand. And when (not if!) we fail Him, Peter is a reminder that no matter how profound our shame, there is always forgiveness and reconciliation with our Savior.

Shay is a blog contributor and a lover of coffee and snow. She is married with three children. For more on our bible study series, click here.