“I am reminded of your sincere faith, which first lived in your grandmother Lois and in your mother Eunice and, I am persuaded, now lives in you also.” 2 Timothy 1:5

When my grandmother went to heaven a few years ago the minister at her funeral described her as faithful, courageous, and loving, which I thought described her perfectly. But to be honest, when I think of leaving a legacy for my own children and future descendants, courageous isn’t always the first attribute I think of. Great mother, yes. Lifetime champion of Scrabble and Rummikub, yes. Lover of Jesus, yes. Courageous? That involves having things to get through, which by definition must be the very hard and scary things, or it wouldn’t make us courageous when we make it to the other side.

When my grandfather was 43 years old he had a heart attack and died. My grandmother was left behind with four children, the oldest being my mother who was 14. I have often thought about all of the ramifications of my grandfather’s death and what that must have been like for all of them. 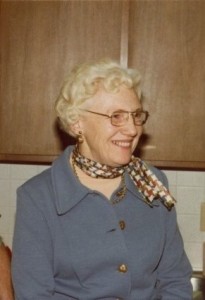 Did my grandmother leave a legacy of courage because she was the strongest woman who ever lived? Or was it because she found her strength in Jesus? When we were going through her things we found boxes full of church bulletins and Sunday school notes from a lifetime of teaching others about God. She raised her kids to love the Lord, she sent them all to college, and she did it all on her own. I don’t want to canonize her but I feel like the Proverbs 31 woman had nothing on my Gram. When the kids were grown she remarried, only to be widowed again three years later. She kept teaching others about Jesus. She went on mission trips and camping trips. Nothing stopped her from living life to the fullest.

When I read Paul’s words to Timothy, I see the legacy of faith that his mother and grandmother gave to him. If I want to leave that kind of legacy to my future grandkids, then my life must be centered on Christ the same way that hers was, so that when they look back at my life, they are pointed to Jesus. I want them to see that no matter what life threw at me, I walked forward with courage because my confidence was in Christ. It doesn’t mean I won’t ever be afraid, but that I won’t let fear stop me.

Shay is a blog contributor and a lover of coffee and snow. She is married with three children. For more on our bible study series, click here.