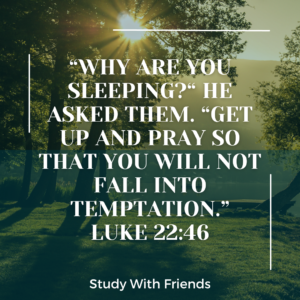 Jesus went out as usual to the Mount of Olives, and his disciples followed him. On reaching the place, he said to them, “Pray that you will not fall into temptation.” He withdrew about a stone’s throw beyond them, knelt down and prayed, “Father, if you are willing, take this cup from me; yet not my will, but yours be done.” An angel from heaven appeared to him and strengthened him. And being in anguish, he prayed more earnestly, and his sweat was like drops of blood falling to the ground. When he rose from prayer and went back to the disciples, he found them asleep, exhausted from sorrow. “Why are you sleeping?” he asked them. “Get up and pray so that you will not fall into temptation” (Luke 22:39-46, NIV).

To blog or not to blog, that is the searing question. Who even knows how to do this–be relatable to all reading AND include Jesus?? Daring, really.

Life is not at all what I expected it to be at 33. I mean, dang, I guess Jesus could have said something similar, right?? In the Garden of Gethsemane, he was so stressed that his blood literally oozed out of his pores. (Luke 22:44)

Although blood isn’t seeping from my pores due to my high level of stressors, I do often feel as if everyone around me is sleeping. “Alone” is an understatement. Now don’t get me wrong, I have people around me who see me, who love me, but they are sleeping peacefully, from what I can see, in my own personal Gethsemane.

Between motherhood, being a wife, daughter, caretaker, friend, in-law (which feels like outlaw most days), and just general life responsibilities, I have never seen myself as… less: so unfulfilled and redundant. With all these people around me, you would think I would feel filled and full, but I feel drained and empty. It’s always one thing after another; someone always neeeeeeeeeds me, but why don’t they SEE me–how life has changed, and actions are demanded?

I often ask myself why Jesus wasn’t so angry at His friends. Maybe He had an attitude when, as per Matthew’s version, He said something like “Come on, Ya’ll, you can’t stay awake for an hour and keep watch (see Matthew 26:40)??” And then again, another time. Did He give up then? It seems like it a bit if you keep reading; it kind of sounds like “GOOD! GREAT! I HOPE YOU HAD A GOOD SLEEP BECAUSE HERE COMES THE BETRAYER.” Is that where He thought up the line, “forgive them Father, they know not what they do?” And He just kept that in his back pocket for later?

Up to this point, Jesus was the strong one, the one with all the answers. He was the one who could talk someone down and then lift them up immediately–the peacemaker, the thought-provoker, the table-flipper. It’s like no one REALLY believed the calling on His life, the job He was petitioned for, except when it was seen fit for THEM. But… what about Jesus? No one asked
Jesus what He NEEDED, and when He told them, they had the audacity to go to sleep.

Okay, okay, so this is sad and that’s probably not the goal here, right? So let me end with this: the garden of Gethsemane was not the end stop, just before what Jesus was called to fulfill. Jesus asked God to remove this cup from Him, because what was in the cup currently was bitter and distasteful. But His obedience and submission were substantial. He had to fulfill that calling, He had to experience that type of pain and overwhelming sorrow He felt, and His friends needed to see it, even if they did go back to napping.

In the end, the cup is mine to hold and all that goes in it, even if it does taste yucky. I pray that it runs over with love from the experiences so that others may not be tempted; more often than not, it is testimony. It is my job to fulfill. Even if I didn’t petition for it, it’s God-given. So I guess the question is not whether or not to blog, but whether or not to fulfill, submit and be obedient.