This is the time of year when everyone enjoys Christmas shows, pageants and plays.  They are probably all very similar to how our church does a children’s service on Christmas Eve.  Adults with a newborn (or close to it) dress up as Mary & Joseph and the baby will join them later, at the appropriate time.  Everyone gets to choose to dress up as shepherds, angels and wise men.  It’s an amazing service where you get to join in if you choose.  In this service, as with most Christmas shows, the Magi (wise men) bring gifts to the baby Jesus as he hangs out in the manger with his parents, shortly after his birth.  We tend to have lots of Magi and many women and girls choose to dress as Magi and it fits just fine in our service- the number and the girls.

This year, as I’ve been looking through catalogs to get ideas for gifts for friends and family, I’m seeing a fun and whimsical saying on dish towels, mugs and wine glasses about Three Wise Women.  I’ve seen this around in different variations.  Some sayings suggest if the Magi were women they would have done things very differently.

I enjoy these fun whimsical sayings, but what would my boys think of this?  What about my nieces?  It disturbs me to think that they would actually think that this might be true.  Can you imagine what this would look like in our day and time with three wise women that our world would choose?  I’m thinking they might choose Oprah, maybe a Kardashian, possibly Martha Stewart.  (The bible does not even state that there were “three” wise men, but many people believe that to be true because of the three gifts, so we’ll go with that.)  Matthew wrote his letter to the Jews.  He is the only one who wrote about the Magi.

The whimsical pieces say the women would ask for directions.  Do you think they would have gone to King Herod to get these directions like the wise men did?  They asked a king who didn’t know anything, but was sure to invite these men to come back and give him directions.  Thankfully they didn’t!

The Wise men had directions in the form of a star that led them direct to Jesus.  It might have been two years later, to a house and not the stable, but they made it!

Whimsical: They would have been on time, or even 3 days early.  Can you picture these women walking hundreds and hundreds of miles?  What shoes would they wear?  How would they shower and change outfits?

Wise:  They left King Herod, walked hundreds of miles and arrived in God’s timing.  They had very few showers and probably more than one outfit and pair of shoes.

Whimsical:  They would have cleaned the stables.  Being a farm girl, I can tell you, no way would they sweep up the hay, straw and all the dropping that the animals leave in these stables.  It’s back breaking work that is not quick or easy.  And it’s disgusting, dirty and crazy smelly!

Wise:  They didn’t even meet up with Jesus in the stable.  They went to a house.  Matthew 2:11- On coming to the house, they (the Magi) saw the child with his mother Mary and they bowed down and worshiped Him.

Whimsical:  They would have brought “practical gifts.”  Truly curious as to what they would think that would be- I picture a baby carrier and stroller, decorations for a baby room or maybe a spa day.  Don’t get me wrong, I had a fantastic shower and made a big deal about the room, but it’s funny to me to think about what we have or stress about now that was meaningless 2000 years ago.

Wise:  I don’t think that the Wise Men could have given any other “practical” or more meaningful gifts. 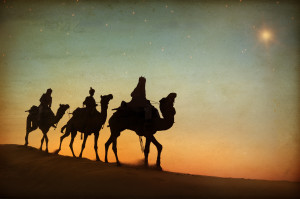 While three wise women is fun to talk about, Three Wise Men were truly wise!

These fun sayings usually end with “Peace on earth” or “Merry Christmas & have a wonderful wacky New Year.”   How about ending with, “Thank you Lord Jesus for the sacrifice you made for me.”

Amy is a business owner and mother of two, on a journey to uncover God’s plan for her life every day.