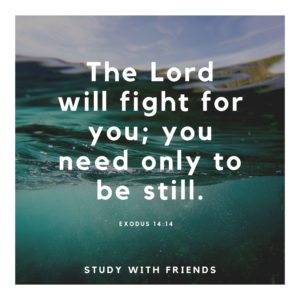 David said to the Philistine, “You come against me with sword and spear and javelin, but I come against you in the name of the Lord Almighty, the God of the armies of Israel, whom you have defied. This day the Lord will hand you over to me, and I’ll strike you down and cut off your head. Today I will give the carcasses of the Philistine army to the birds and the beasts of the earth, and the whole world will know that there is a God in Israel.  All those gathered here will know that it is not by sword or spear that the Lord saves; for the battle is the Lord’s, and He will give all of you into our hands.” 1 Samuel 17:45-47 (NIV)

I’ve read this before, and any kid who grew up going to Sunday school or Vacation Bible School has doubtless heard the story of how David slew the giant Goliath. But as a writer, I like to imagine that David’s speech was loud and mighty and that he resounded with his audience just like William Wallace or Aragorn. But whether he shouted or spoke quietly, David went out with confidence because he knew that the fight belonged to the Lord. I like to picture his confidence, the feeling building up in him as he took action when no grown man would.

There are some obvious takeaways from this event, that God uses unconventional means to win battles, or that a stout heart can win over brute strength. But let’s look at the other angles. A lesson that I have often shared with my children is to “do it afraid,” when they are nervous about something. True courage is going forward in spite of any fears. Maybe David really was as brave as he sounds in that speech, or maybe he was shaking inside while he said it. But David knew the most important part of this story, that God would win this fight, not he. His human nature may have had doubts, but he knew in his heart that His God would win the battle.

A verse that comforts me during trials is Exodus 14:14. Moses had just finally led the Israelites out of Egypt, after hundreds of years of bondage. They saw the plagues that God sent and how Pharaoh had hardened his heart. They had only just begun their walk to freedom when they saw horses and chariots coming out to recapture them. They were terrified. But Moses exhorted them, telling them that the Lord will not fail them, that He will deliver them. “The LORD will fight for you; you need only to be still.” (NIV)

When we need courage to face whatever hard times life brings us, we can look at how God has provided for His people again and again, and know that He is sovereign, and no matter the outcome, He will fight for us. Indeed, He has already won.

Shay is a blog contributor, board member, and a lover of coffee and snow. She is married with three children.  You can read more from Shay here, or check out any of our Bible studies by tuning in to your favorite radio station, listening to our podcast on iTunes, or listening through TuneIn or Stitcher online radio.