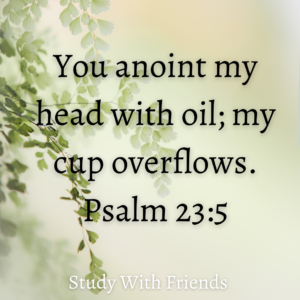 I’ve been using the made-up term ‘overblessed’ to describe the past few months.

You could use the term to describe the effects of one event, but I like to think of it as a state of being. I know it sounds kind of goofy, but I think that makes it even better. I didn’t even think of it at the time I started saying it, but it’s really just a one-word version of Psalm 23:5:

you anoint my head with oil; my cup overflows” (ESV).

Oh my, this psalm could make me cry if I think about it for too long. Last summer, God made some mountains move and gave me the gift of joining a team of counselors at a week-long summer camp for kids called Junior Week. Every afternoon, small groups of us would rush to our super-secret counselor time for a bit of rest, and the camp pastor would read us Psalm 23 as we quieted down for a nap or hushed fellowship time. On the very first day of camp, I heard the first verse in a translation I’d never heard before (it was the NLT): “The Lord is my Shepherd; I have all that I need” (italics mine). I had always thought that the translation I was used to, which reads “The Lord is my Shepherd; I shall not want,” was teaching me that God was the only thing I truly need; I should not be wanting things other than Him. While this is essentially true in that He is the only thing I need more than anything else, I was always troubled by this verse because I would think about how I wanted other things too, like a good career, close friends, a family of my own one day, a nicer oboe, time to travel…and I would start to feel guilty because Psalm 23:1 is telling me I shouldn’t want things! But I was so very wrong to interpret it that way. Yes, I should desire God more than anything else, but my eyes were opened when I heard this new wording of the verse: “I shall not want” (ESV), because I already “have all that I need” (NLT). Verse 23:1 isn’t telling us to avoid asking God for the desires of our hearts, it’s simply telling us that He will provide for our every need and will sustain us perfectly in His will and timing so that we won’t find ourselves wanting what we need–because we already have it.

Imagine the peace in my heart when I saw God’s promises I had just begun to understand in Psalm 23 come full circle this year. Last summer I found such assurance in this first verse that I hardly noticed verse 5: “You prepare a table before me in the presence of my enemies; you anoint my head with oil; my cup overflows.” As with most people, I was greatly affected by the pandemic of 2020. After a painful four years of college, the damage of the pandemic seemed to be a horrible end to a story I had hoped to see redeemed. In fact, in the moment, it seemed less like an end and more like a proverbial question mark, threatening the absence of a real redemption and prolonging my frantic search for an end to my hurting. Things spiraled in my life worse and worse every month, and by the time this past March came around, I was losing hope and losing steam to keep trying anything at all after the exhaustion of four years of undergrad and the dreadful year after.

This was the walking “through the valley of the shadow of death” that immediately precedes v. 5. And in the midst of those moments, it’s really hard to even entertain the possibility of a cup overflowing; it seems illogical to think about anything other than that cup draining, even though scripture clearly says God can do otherwise. In my prolonged suffering, I reflected on the negative and dwelled on the pain. I experienced anger towards the Lord for the first time in my life. I accused Him and yelled at Him and questioned Him and confessed I felt separate from Him and like I could no longer trust Him. And I didn’t do anything to deserve the rescue I received. And that’s the part that could make me cry. It’s one thing to be broken and patiently wait for the Lord, asking Him with humility to give you wisdom and bring you out of your suffering. But it’s another thing to stay mad at Him, remain looking selfishly inwardly and avoiding gratefulness entirely, and still see God rescue you from your pain in His miraculous way. In April God felt it to be time to pull me out of the darkness I was in. In the most beautiful way, He moved mountains I doubted He could touch, to bless me with all I need, infinitely more than I deserve, and even still more than I asked for: He pulled me out of a depression so I could see the world alive with His presence again and I sit here now watching my cup utterly overflow. I have no idea why He would give me so much. I didn’t want to be overblessed, I didn’t think I would be overblessed. I know I don’t need to be overblessed either. And it isn’t the overblessing that makes me love God. It’s the fact that He did more than I ever deserved when He hung on the cross, all that I need, and yet He still decides every day to fill my cup to overflowing. I write out this rather vulnerable part of my story as an encouragement for you if you still can’t imagine the possibility of anything other than that cup draining further. While each of our stories is written differently and ends in many different ways, there is a certain universal dread in the inability to see ahead of you in darkness. I write these things hoping my rescue, despite my failure to trust, listen to, and lean on God, will show that He does not rescue us because we do the right things to deserve rescue, but simply because He loves us that much. I’ve seen His ability to redeem the worst of it and I love Him more than I ever have because that redemption has shown me a deeper understanding of His love for his children, and I believe the same truth can redeem even the darkest of pain.

Isabella is a recent college graduate in the field of music education with a passion for helping kids find their creativity and identity through music. You can listen to any of our Bible studies by tuning in to your favorite radio station, listening to our podcasts on our website or iTunes, or listening through TuneIn, Stitcher, or Spotify online radio. You may also watch us on YouTube!